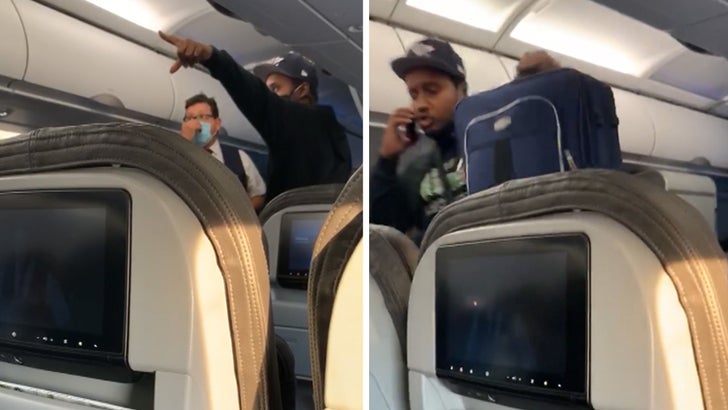 Air travel is getting even more stressful in COVID-19 times … an American Airlines passenger had a meltdown over a medical condition and caused a huge scene.

The wild video picks up with a passenger arguing with a flight attendant, and our sources say the man was losing his cool over being told to keep his face covering on despite claims he was having trouble breathing.

The dispute gets tense and the vulgarities start flying back and forth … and at one point, the flight attendant threatens to call the cops and tells the passenger, “I’m gonna have your ass arrested!!!”

The incident came to a head when the LAX-JFK flight landed in New York and was met by Port Authority cops who tried to interview the man, but he was uncooperative. We’re told he was not arrested on the spot, but police will continue to investigate the incident and charges could be filed at a later date.

We’re told the passenger claimed he had a medical issue and needed air … but as you can see, he had no problem yelling and screaming about his flight experience with a buddy on the phone.

The cross-country flight could be the last time this guy flies with AA … we’re told the airline is looking to ban him from future travel on the airline.

Play video content This is Paris/iHeartRadio Paris Hilton doesn't have a bun in the oven -- despite intense media speculation over the past week --...

Play video content TMZSports.com Austin McBroom admits Bryce Hall was NOT paid for their "YouTubers vs. TikTokers" fight, but the social media star claims it...

Wyoming born wrestler Rulon Gardner inspired the world in 2000 when he traveled to Sydney, Australia to represent Team USA as a heavy-weight Greco-Roman wrestler...